For any of you who have been following the political shenanigans in the other "political" threads, a whole lot has gone down. Politics finally degenerated into warfare after the Greater Communist Shoal Conglomerate (biters) had a border dispute with the Neo-Luddite Advocation Party (crabsquids) in the Lost River. Battle lines were drawn, and alliances made. On one side, the Communist forces, led by @phantomfinch's army of GCSC biters. Also in this alliance were the Warpers of the Public Health/Safety Party, led by @Enderguy059 (who mysteriously went missing at the start of the war). Even the Reefbacks were not immune, as even though they had won control of the Grand Reef through politics, a few of their number were co-opted by the GCSC. On the other side, the Reef Conglomerate. An alliance between unlikely partners, the Reef Conglomerate brought together several political mainstays. The lead organizer, @Jamezorg of the NLAP, commanded an army of crabsquids in the Grand Reef and surrounding areas. The belligerent @ResolutionBlaze of the aptly-named National Violence party commanded the aggressive reapers and stalkers. Lastly, the Surprisingly Appealing Hypnosis Party (mesmers) was begrudgingly drawn into the alliance, though its leader ( @dealwithitdog ) went missing at the start of the conflict.

Thus, at the beginning of the war, the planet of 4546B was divided up, about to engage in a bloody battle: 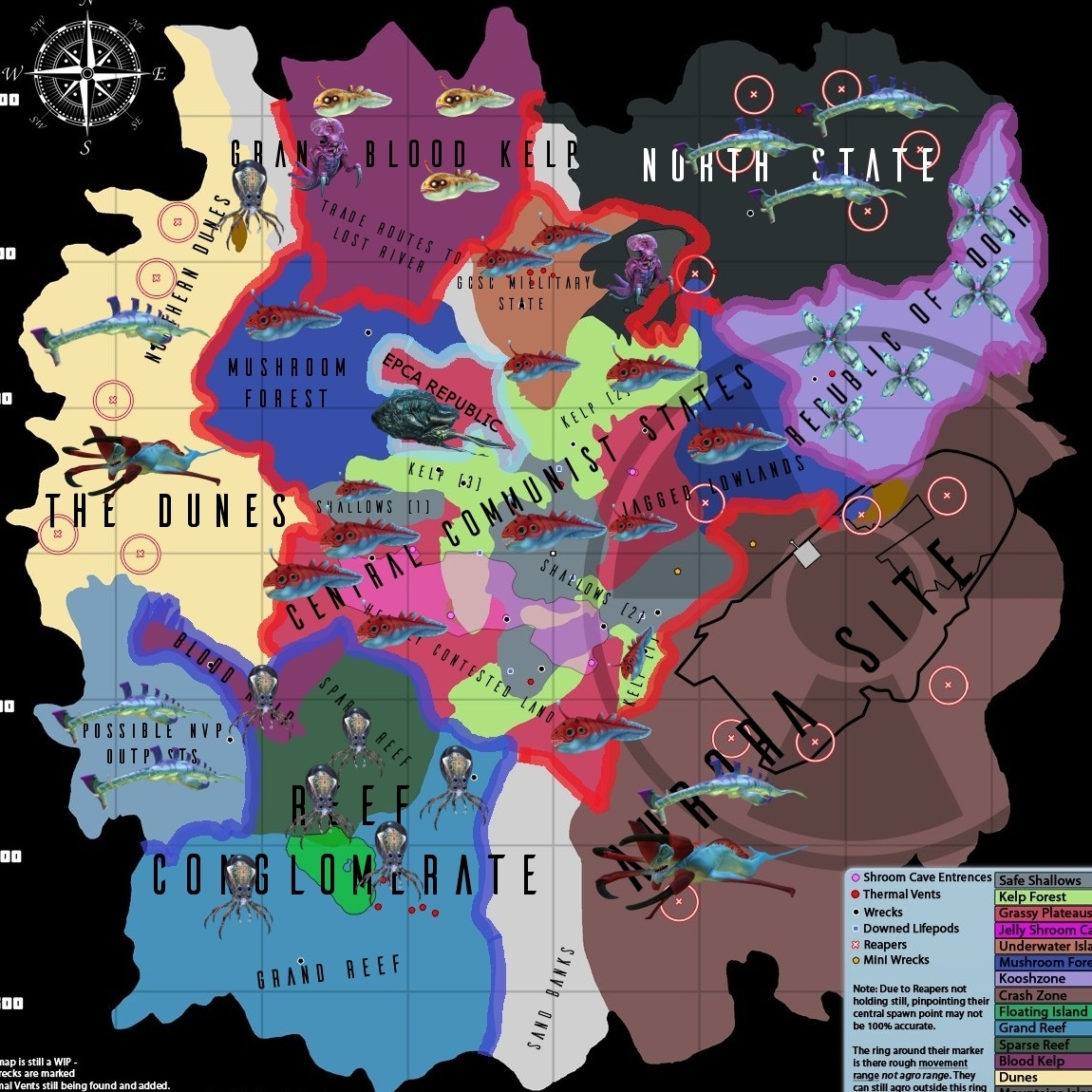 The conflict raged on, seemingly without end. The United Crabsnake Republic, emerging from civil war, announced their independence from their GCSC-controlled neighbors. They even went so far as to spar, indecisively, with a few invading GCSC forces. The NVP changed nominally to the Devorandum Confederacy, and several inspiring charges were made on both sides of the conflict into the Blood Kelp biomes. The Lesser Blood kelp changed hands between the NLAP and GCSC several times, and an epic attack was made on the Greater Blood Kelp by the DC. This attack was soon reversed by an equally inspiring GCSC counterattack, dubbed "Operation Bloodbath." Throughout the conflict, @Skope consistently braved the front lines to bring pictures and accounts of the war to us. No less in informative value were @Jamezorg's verbal accounts of the many battles (at this point I would reccomend checking the Subnautican War Thread for all of these). Towards the end of the conflict, @Enderguy059 suddenly returned and renounced his warpers from the GCSC. The Republic of Koosh also completed an intense campaign against the GCSC dubbed "Silver-wing's Charge." All told, the conflict resulted in the following geopolitical map: 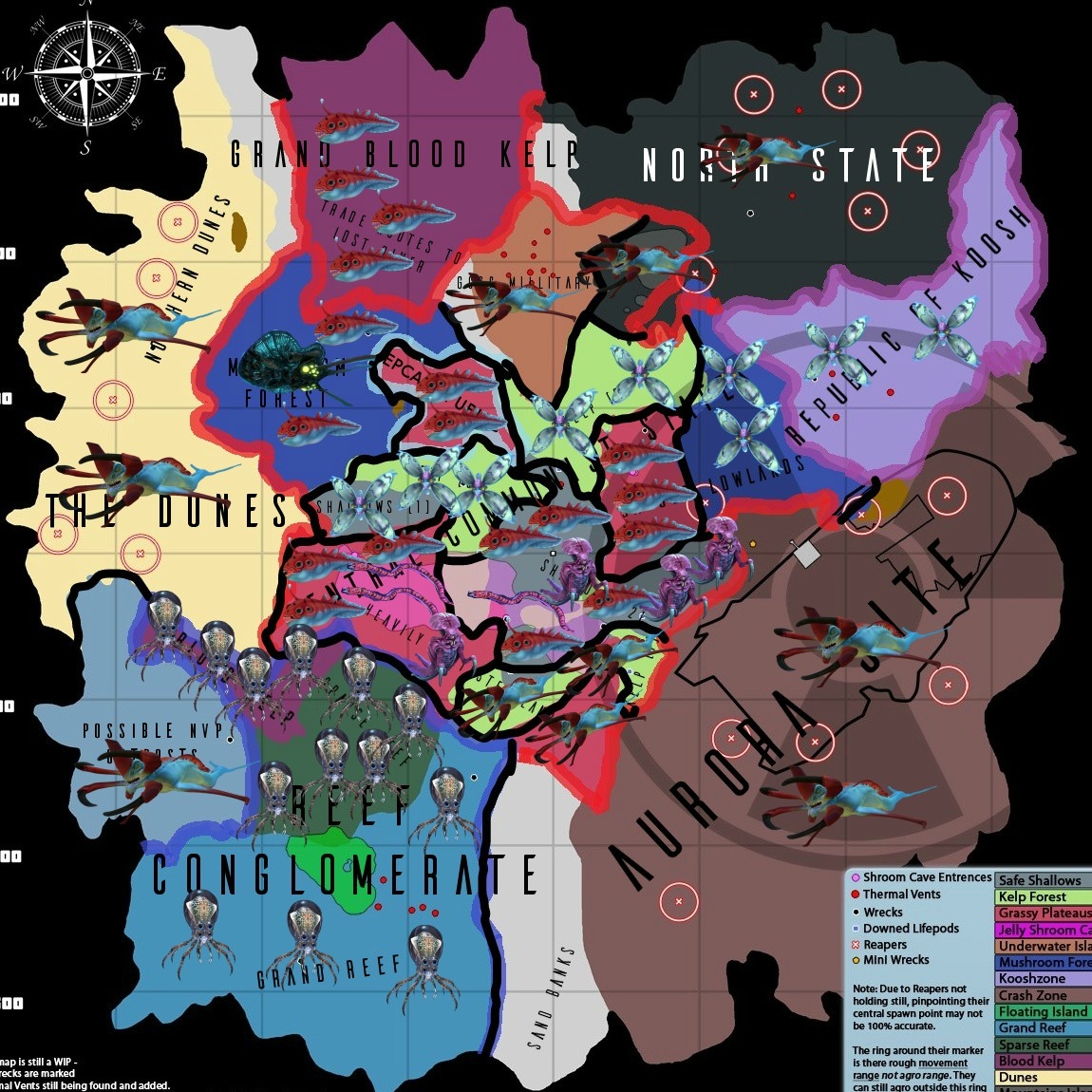 Exhausted, most of the involved parties were jolted into peaceful sentiments by the shocking news that the President, a Peeper, had been wounded due to the conflict. With the president resigning, a new political void was introduced, amid tense party feelings. Though the nation may be in shock from the war, the impromptu election of the next Subnautican President is now upon us.

The Candidates:
Though no candidates have had time to prepare to run, several figures immediately stand out as presidential material: Firstly, @ResolutionBlaze, the leader of the Confederacy. Forged in the fires of battle, he has stood against biter armies and come out tougher for it, mounting several devastating attacks on the GCSC during the war. He has even run for political office before, as the NVP was the opposing party in the original Subnautican Presidential Election.
Additionally, @Jamezorg stands out from the crowd. When war was imminent, he organized the largest political alliance in 4546B's history, even roping in former political enemies. Speaking for the often-repressed Crabsquids of the Deep Grand Reef, he first made his presence known as an outspoken activist in the Grand Reef Gubernatorial election. Though he may have lost that election, he stayed strong throughout the battle, with not one inch of territory ceded or lost by the end.
Thirdly, the embattled @phantomfinch. Though the GCSC suffered heavy losses throughout the battle, he stood alone against the combined forces of the Reef Conglomerate and fought them, often to a standstill. Orchestrator of the successful "Operation Bloodbath" campaign, his devotion to his forces and troops is surpassed only by his dedication to the communist cause. He also famously invited the head of the NLAP to a game of football in the memorable "Christmas Truce."
@dealwithitdog also seems fit for the presidency, though he did not prominently serve in the war. An avid politician, the SAHP was poised for victory at one point during the Grand Reef Gubernatorial election, eventually polling slightly less than the Environmental Protection and Cooperation Agency. Despite this defeat, however, the SAHP has remained a prominent party in politics, voicing their opinion and famously establishing a feud with the NVP. They even seceded from the union of 4546B, forming their own Republic of Koosh. Though he did not orchestrate it directly, his party was also responsible for "Silver-wing's charge," a tactical maneuver which captured 3 GCSC territories in one turn.
(I promise you this list only continues on for a little while longer)

@skope also proved his mettle in the furnace of civil war, both as a reporter and as the head of the UCR. The Jellyshroom caves had been rocked by a civil war between the small crabsnakes and the "snekzilla" crabsnakes, beings of immense size and power (who were also probably bugs). Uniting in a peaceful treaty as the United Crabsnake Republic, the UCR was plunged directly into another war- this time, one on a global scale. Though their participation in the conflict was small, they managed to emerge from the battle still unified. Skope's reporting on-scene also provided, in shocking detail, the horrors of war first-hand.
@Enderguy059 is the last major player in the war, and deserves credit as well. Though he arrived towards the end of the conflict, his party's devotion to peace was strong enough that he was willing to forsake his old alliance. Additionally, the PH/SP has always promoted the benefit of the people through scientific progress in past elections, and still remains the best possible hope of clearing the Caraar.
@Casual_Player is also a person of interest, and in this case I do mean person. A stranded survivor of the Aurora wreckage, he represents the Foreign Migration Minority Advocates. He has notably made scientific research advances into the G.U.N. (sorry, precursor array).
@Julian1337331nailuJ is an... umm... "Representative" from the... uh.. Rich Clan? An Avid (If Partially Grammatically Incorrect) Political Player, He Has Engraved His Mark (And His Capitalization Habits) Onto The Entire Planet. Make 4546B All Caps Again!
DJ Ampeel is, what else, an Amp-eel DJ from the koosh zone (consider this @Darwin-Evolution ). He is known for.... well, nothing politically, although his mixtape is reportedly at the source of all Koosh Zone thermal vents (which is to say: FIRE!!!!). Vote DJ-AMPEEL for mandatory sick beats.

Nameless politicians:
The ECPA is running a reefback candidate, seeing as they have won the Grand Reef Gubernatorial election, and are currently the most popular party. It is unknown at this time their opinion on the actions of the Reefbacks during the Civil War. As of right now, no spokesfish for the EPCA has made themselves present.

The Issues:
In addition to the politicians, the issues on the table for the election are no less pressing; simply a small sampling of them are as follows:
1: The drawing up of an official peace treaty, and the terms and conditions of such a document
2: The actions taken against or for any provinces captured or ceded in the war: Do the parties involved get to keep them, or should they relinquish them to previous boundaries? Or, potentially, a mixture of the two, ceding some territories or leaving others?
3: The militant reefbacks involved in the combat, and what their actions mean for the EPCA's message
4: The split of the PH/SP, and whether or not the party can re-join/what will happen to the GCSC-controlled warpers?
5: The military vs. political control of the Grand Reef, does it belong to the NLAP now or still the EPCA?
6: The actions taken against POWs, and repatriation
7: The merging of both sides of the conflict into a single union once again, and how that will happen...

So, I leave this now in the people's hands: Who will become the next Subnautican President, in the wake of such dizzying global shocks?
sorry for the excessively long discussion... it is the FINAL ELECTION, after all!
Paleo/Bio nerd. Big fan of Subnautica, particularly the creature design.