New Mexico Join Date: 2017-06-25 Member: 231340Members
June 2017 in Subnautica General Discussion
These things have terrorized me since I started playing this game over 80 hours ago. But now I have a reliable strategy for killing the Reaper (at least as of Voice of the Deep patch). If you ever wanted to know how you're supposed to face one of those beasts, and kill it, read on.

I developed this strategy out of necessity. For me, one spawned at the upside-down life pod near the Aurora and I had no chance of exploring it without facing the Reaper. It terrorized me. Always I was looking over my shoulder for it. It is now dead, and I now explore in peace.

There are videos of heroes fighting the reaper with nothing but the seaglide, stasis rifle and knife. It is indeed heroic, but that scares the everloving crap out of me. My way, perhaps, is safer and easier.

What you will need

What you need to do

Find a Reaper. They often appear suddenly as they load in. You can tell they are close by their calls. Move in towards it. Switch to silent running so it does not attack. Then, find a place near the bottom to park your Cyclops, being sure to turn off the engine. When you chose your parking spot, do so carefully. You must be able to reach your Cyclops again.

Once you have found the beast, if you are scared of him, I recommend you turn off the sound (he sounds terrifying) and put on some fighting music. It will help you. Once you start fighting the Reaper you do not need to hear him anyways.

Deploy the Prawn. Once you hit the bottom find the Reaper and face him. Keep facing your opponent and wait for him to come grab you.

Fight. Hold both left and right mouse buttons. Be sure you are attacking with both claws for the duration of his grasp. Sometimes he will do only 27%, but I have had him inflict up to 90%. I have not, yet, taken 100% damage from the Reaper in a single grapple.

Get back to the Cyclops. This is the most difficult part of the fight. When he lets you go you must A) ensure you do not fall into a crevasse that you cannot escape from, B ) know where your Cyclops is in relation to you so you can head towards it, C) see what direction the Reaper is swimming in, and D) do not get grabbed by the Reaper a second time.

I have sometimes survived two attacks from the Reaper. The first blow takes me to 73%. The second takes me to 23%, if I am lucky. Do not depend on luck and instead flee to your Cyclops. Once you get back in the bay of the Cyclops, your Prawn will be automatically repaired as long as you have the repair bay mod (and in a matter of seconds) and you can reposition your sub to be closer to the fight.

Give chase. Maneuver your Cyclops over towards the Reaper. This can be hard. He will move fast. And sometimes it is not clear where he has gone. I had the misfortune of having one Reaper lead me towards another, so you must be careful, but you can find him. Move directly towards him and hit silent running, find a spot near the bottom then cut the engine. Then, deploy in your Prawn.

Continue this part until the Reaper is dead. Deploy Prawn. Fight. Get back to the Cyclops. Chase. For me, I usually count five times. On the fifth time, the Reaper will die. The only time he did not die on the fifth fight was when I used a drill arm as one of my arms, that is why I do not recommend the drill. That fight lasted seven rounds. Keep it to five, use claws.

Other notes: This fight will last for at least a day. Or two. If you like to fight by light, bring a bed in your Cyclops. The Reaper will not hesitate to kill you so use every advantage you have. Also, bring food and water. Plenty of it. There's nothing worse than being facing off with the Reaper when you see you are below 20 food and water. If you die, die well fed.

Of the four matches I have had, I have killed the Reaper in all but one. In my second match, the Reaper fled in a strange direction, towards the aft of the Aurora, and in looking for him I found one of his brothers. We fought, but I made the mistake of not going back to the Cyclops after the first grapple. Fight smart. Return to the Cyclops after he grapples you and repair.

As for my personal feelings, for me, it was like fighting a dragon. The beast comes and scoops you up and you battle in the air (or water... or actual air if he breaches) and then he drops you and you plummet. You move across the ground, trying to avoid him and his terrible jaws. Then you make it to safety and run after him madly in your Cyclops, like Ahab chasing the White Whale.

The good news is that, so far, when the Reaper dies, he stays dead and the ocean is a little safer.

To all the other swimmers out there who find Subnautica as captivating and terrifying as I, I wish you the best and hope these notes help you. 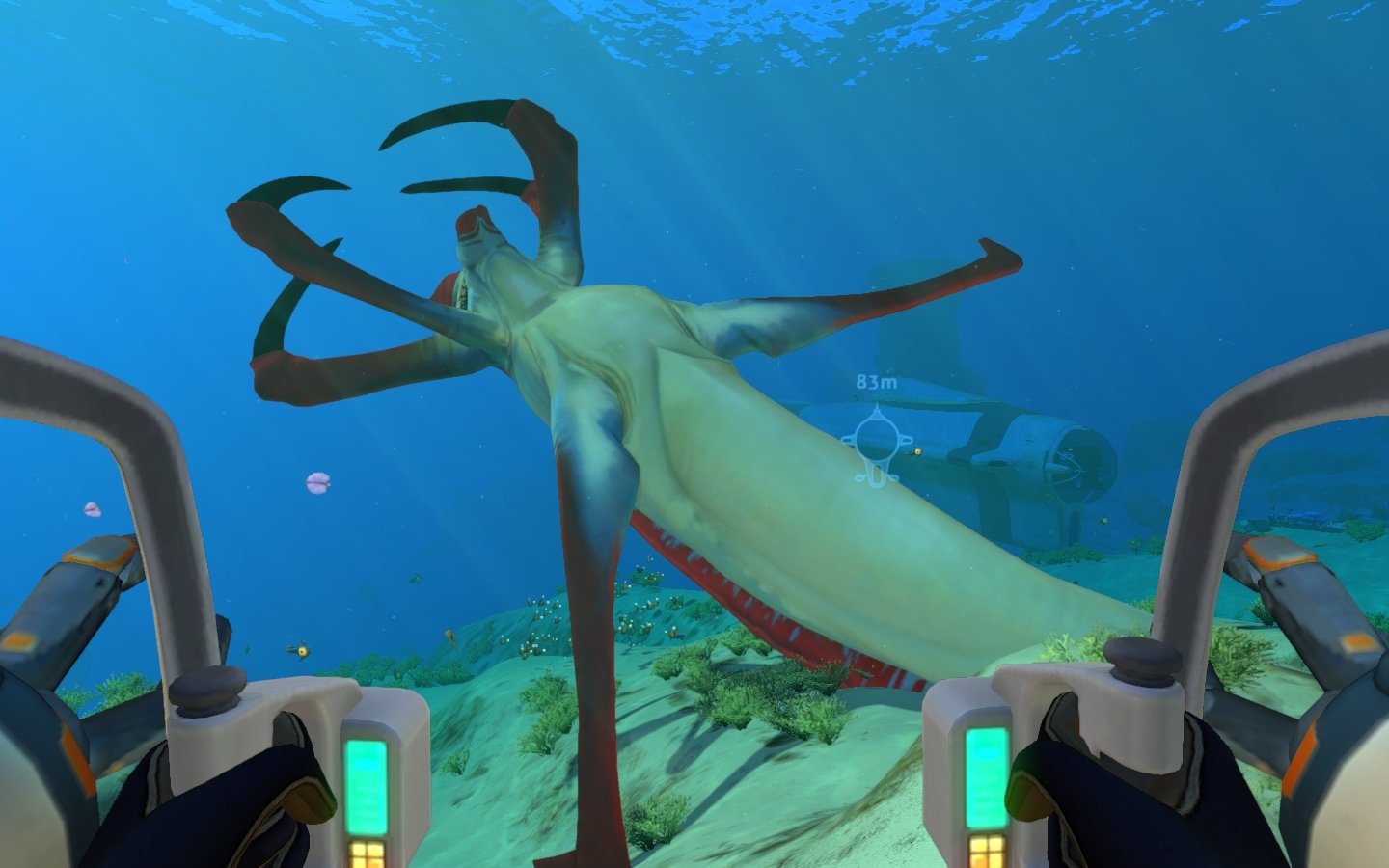