[Survival] Dealing with decompression and fatigue

Canada Join Date: 2015-05-17 Member: 204607Members, Subnautica Playtester
May 2015 edited May 2015 in Subnautica General Discussion
For those of us who love the survival and the realism aspect, here are some concrete suggestions

Add one new meter called 'pressure'
Next to it is a number: N atm
It shows your pressure level in atmosphere
The meter is fully green as long as i remain at the same depth or dive deeper.
If i dive deeper, the meter remains green but the number next to it (the pressure) increases. 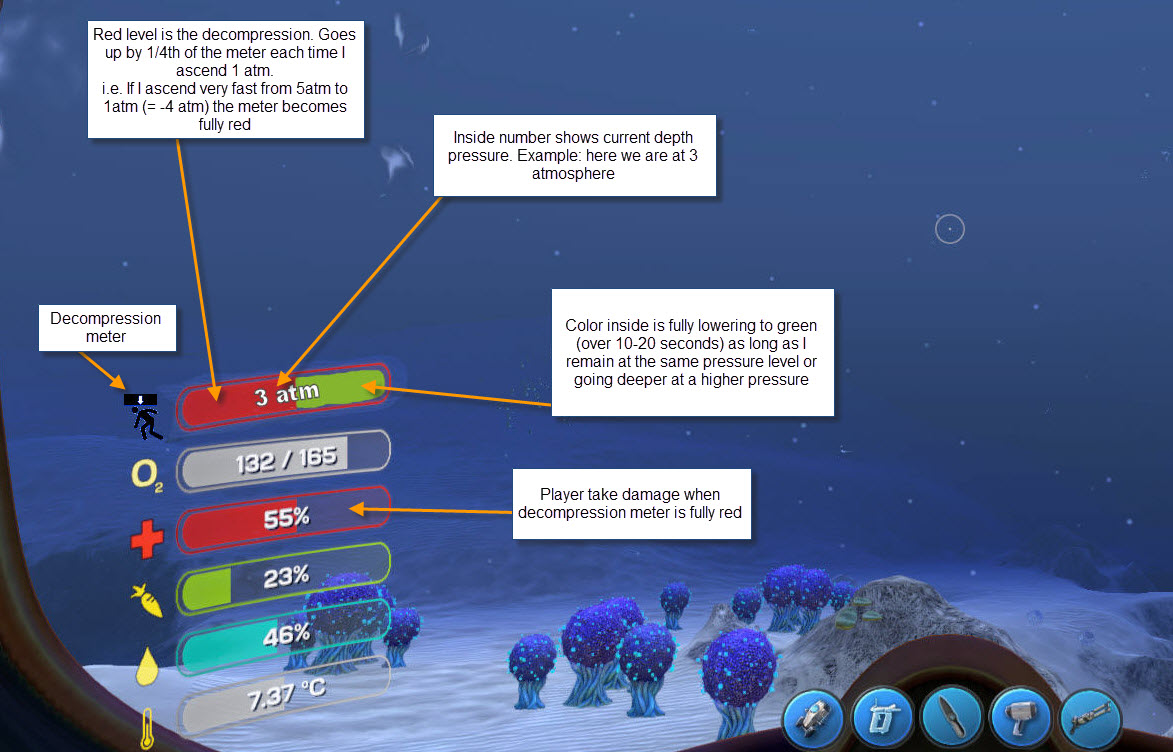 However, the decompression meter decreases over time - say 10-20 seconds to go all the way back to green.

As long as your decompression meter is fully red you take damage until death.

You'd now have to take this into account when ascending, either by ascending diagonally slowly enough or by taking breaks in your ascend, to let your decompression meter go back to green.

1) its much more realistic.

2) it totally changes your survival strategy. Now intermediate-depth bases becomes mandatory before you can handle bigger depth. No more crazy ascend to get air! Management of your air supply becomes much more critical. Which means it's also a very interesting incentive to actually build several bases at different levels as you explore deeper areas.

3) the mechanics remains very simple game wise (no need for complicated decompression chambers with sceals, and the decompression time doesn't need to be calculated and is very quick, etc). For simplicity's sake, it could also be that this mechanics only works when the player is not in a sub like the cyclops or the seamoth, or it could also work when you are ascending your subs.

4) Going down can be done quickly, but going up takes planing and care

EDIT: This can easily be added as an option, so that it can be turned off for whose who want to explore without decompression issues.

A meter for fatigue can be added. This one would drain very slowly, i.e., it can last a day and a night before it's exhausted.
When it is exhausted, you can no longer swim, so you fall to the sea floor (or base floor). When you don't swim, it's going back up, but also very slowly.
So you could "rest" a few minutes on the sea floor (provided you have enough air) to recover enough stamina, say, to reach your sub or your base. But mostly, if you are still in the water and you no longer have stamina, you are pretty much going to drawn.

Inside the base or sub a bunk-bed ca be added (constructed). When used, it:
DecompressionMeter2.jpg 195.3K
3 Off Topic 1Disagree Agree 3Awesome
«12»