Members Join Date: 2018-01-25 Member: 235708Posts: 42 Advanced user
July 2019 edited July 2019 in Subnautica General Discussion
The more I interact with snow stalkers, the less believable they seem. It's not just that they're simple and easy to outsmart, but they seem implausible and out of place in the world.

Too Territorial
<u>Problem:</u> Snow stalkers seem to be deliberately placed so that they each have a small territory to "guard." Problem is they won't attack or pursue you if you're standing outside this territory, even if they're staring you in the face. Furthermore, if removed from their territory, they will immediately begin trying to walk back and will ignore the player unless the player gets right in their face. It seems kinda cool when they have a den with babies, but makes them seem really derpy when they're outside, supposedly hunting, but don't react when potential prey stands just an arm's reach away.
<u>Solution:</u> Remove the arbitrary boundaries, or at least make them way, way less restrictive.

No Vertical Mobility
<u>Problem:</u> Despite being twice as tall as the player, snow stalkers cannot walk over anything the player cannot walk over and, unlike the player, cannot jump. Because they also make no attempt to navigate around obstacles, dramatic chases will often end abruptly when the snow stalker runs into a cluster of mushrooms or a small pile of rocks. Small ledges or steep inclines provide safe hiding spaces for the player. The only thing to worry about is snow stalkers' magnet hands: if you stand too close, they can still grab you. 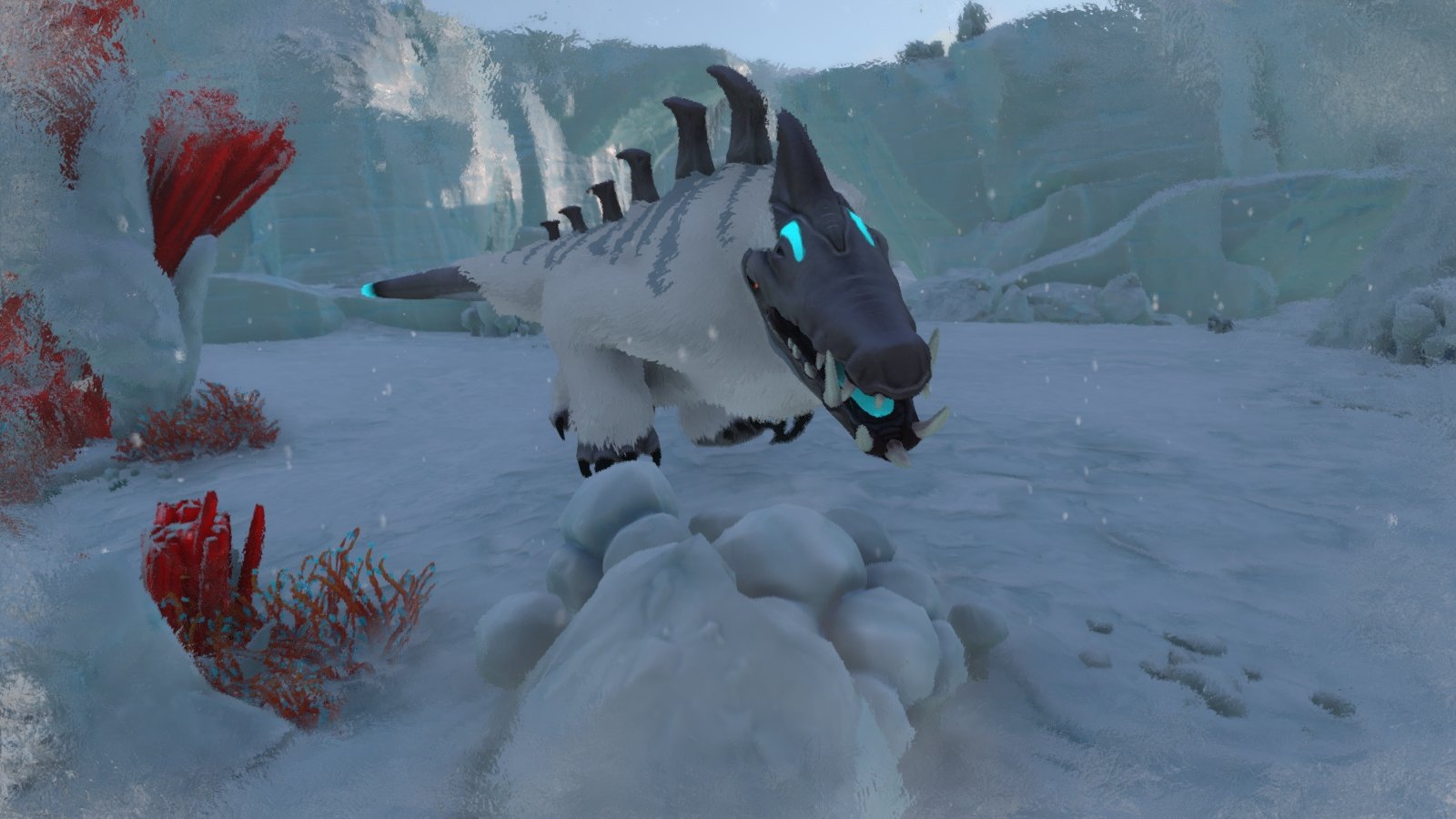 <u>Solution:</u> I don't really know how character collision works in game engines, but surely there must be a way to increase the max height limit of obstacles they can walk over. It might even be worth giving them special jumping or limited climbing ability, because right now they're pathetic. Obstacle avoidance would also be great.

Forgetful
<u>Problem:</u> When a snow stalker either catches or fails to catch the player, they will "forget" and become docile for about five seconds, wandering around and performing idle animations. (Sea creatures do this as well, but it's more obvious and jarring when you don't have the constant forward motion and six degrees of freedom of swimming.) With a little bit of patience, and by exploiting their vertical mobility as mentioned above, moving through a snow stalker's territory is extremely easy even on foot.
<u>Solution:</u> Make them more determined! They should be pursuing the player in some capacity for as long as they can see the player, only giving up if they determine that the player absolutely cannot be reached (accompanied by frustrated growling).

Catch and Release
<u>Problem:</u> In addition to the above problem, snow stalkers don't seem too determined to eat the player when they do catch them. They'll pin you to the ground, Robin wrestles them off with her... giant human muscles? And then they just sort of let you go if you still have health left. Mechanically this is fine and balanced, but it looks ridiculous.
<u>Solution:</u> Firstly, new animations. Make it look like Robin actually fights them off. She's not a soldier, but I'm sure she's a tough girl. Punch them in the eyes, kick them in the nose, whatever. Functionally identical, it just looks better. Secondly, after the snow stalker releases the player, they keep aggro, but spend a couple seconds licking their wounds or something and then go right back to chasing you instead of idling or derping around. I made a short example animation (hire me!).

They Make Great Mounts!
<u>Problem:</u> You can stand on a snow stalker's back and it can't do anything about it. Sit back and enjoy the ride! 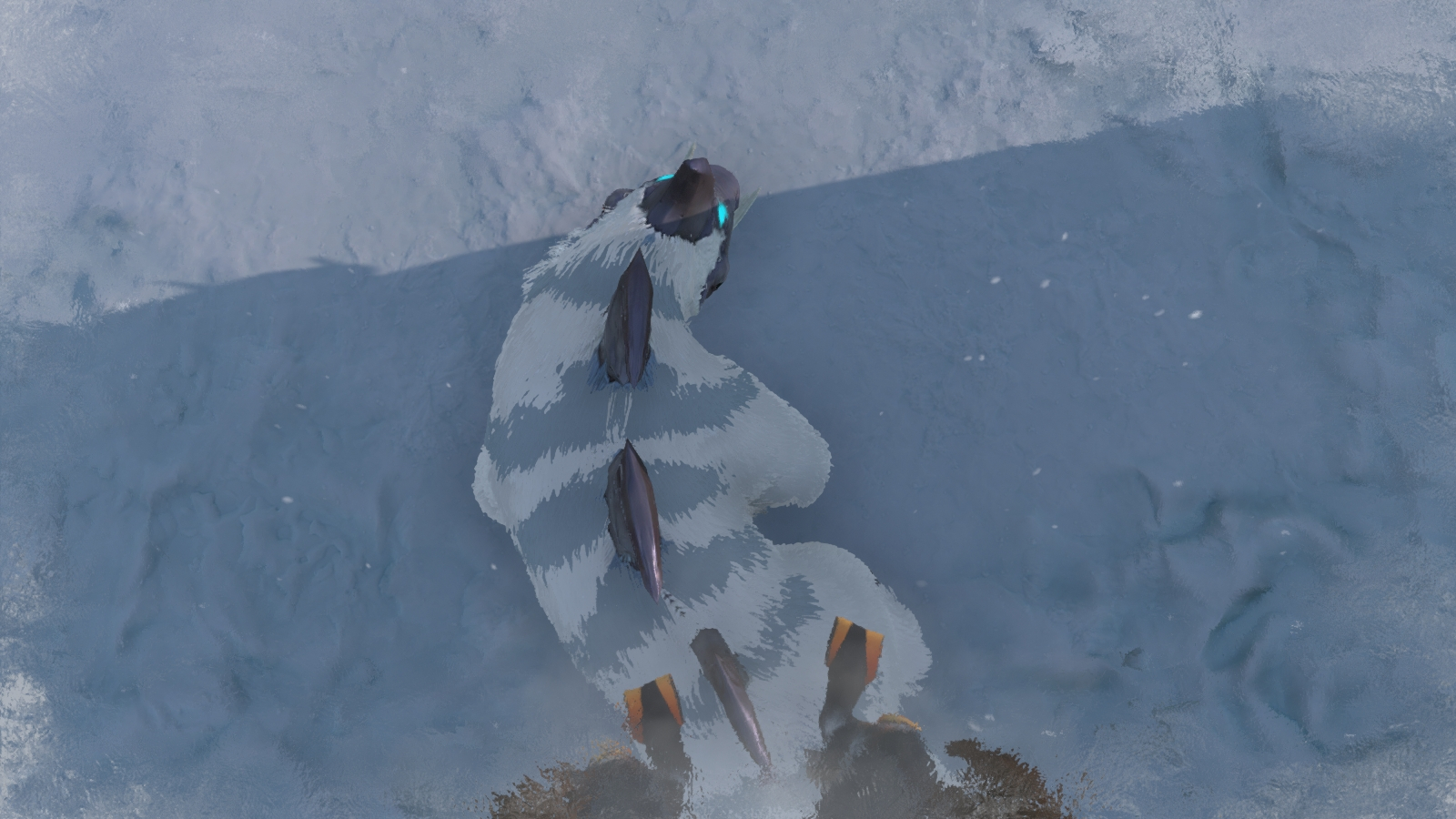 <u>Solution:</u> A simple problem, but the solution is probably more complicated. How does the game know you're on its back? Again, not knowing game logic, I don't know exactly what you can do. Maybe have a rule where if the player is in physical contact with the snow stalker for X seconds, it performs some bucking animation and applies an impulse to the player, knocking them back and additionally knocking them prone for a second. ...Or just make their backs count as slippery surfaces.

Spy Pengling Makes You Invulnerable
<u>Problem:</u> In keeping with the theme of exploiting snow stalkers' weaknesses, it's good to know that they cannot harm you while your spy pengling is active. They'll still charge at you, they just won't grab or bite you. Makes for great photo ops at least! 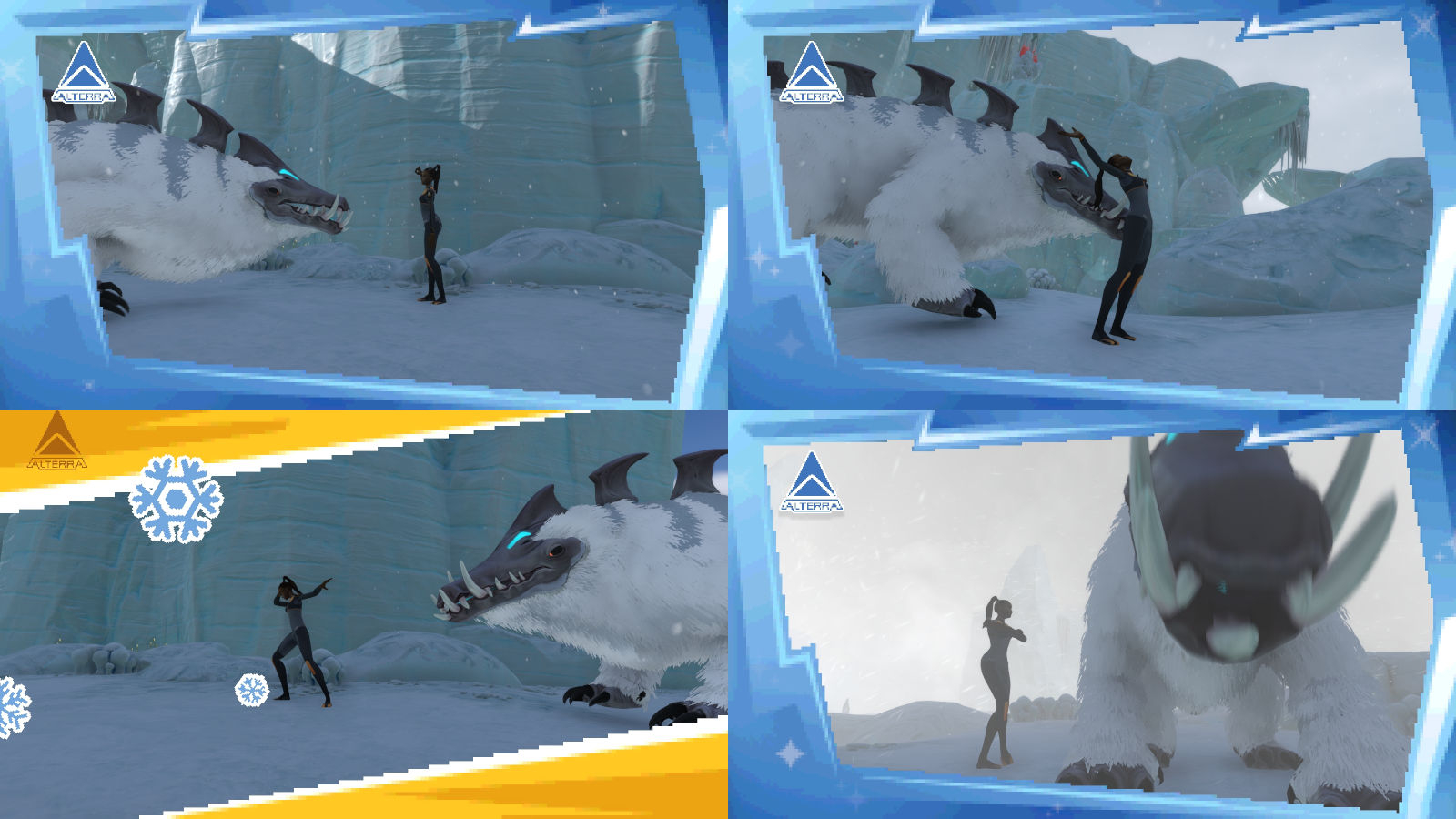 <u>Solution:</u> It should be the player's responsibility to make sure they're in a safe location if they know they're going to be immobile for a few minutes. Snow stalker attacks should pull you out of pengling mode. Loading times are a potential problem -- the player should not be vulnerable for the entire duration of the load since it would be unfair to players with slower PCs, but at the same time it would be awkward to finish a 30 second load to see a snow stalker politely waiting for you to finish. Perhaps it can go through the motions of the first few seconds of the tackle animation, and then pause until the player is done loading so that they "wake up" pinned to the ground. Terrifying!

What Do They Eat?
<u>Problem:</u> This one is the biggest threat to my suspension of disbelief. Snow stalkers are remarkably well adapted to land life, but nothing else on the planet is, which begs the question of why they're even there. Presumably snow stalkers are on dry land to prey on pengwings, but pengwings are only found in one small area of the Ice Flats and spend most of the time in the water anyway. More damning, snow stalkers and pengwings will actually completely ignore each other; snow stalkers will attack and kill baby penglings (while the adults look on), but they don't even eat them. Robin is literally the only thing these fearsome predators ever actually eat.
<u>Solution</u> A few things. Firstly, describe snow stalkers as opportunistic omnivores. If food is scarce, why wouldn't they eat anything they can fit in their mouths? Secondly, give stalkers and pengwings some interactions. Snow stalkers should chase (AND EAT) pengwings, and pengwings should flee. Thirdly, maybe remodel some of the terrain to include more pengwing pools. They don't have to connect to the open ocean, but they could have cracks and holes too small for the player to give the impression that pengwings could access the ocean from there. Lastly, maybe add some more terrestrial fauna to justify snow stalkers being so far from the water. They don't have to be big or plentiful -- an occasional burrowing snow bunny or a tiny tunneling ice worm -- but there should be something other than penguins and sky rays. PDA text could even allude to a larger herbivore, possibly extinct, that justifies snow stalkers having such bulk.

Dull Senses
<u>Problem:</u> Unless you're standing right in front of them, snow stalkers are surprisingly ignorant. They don't react to noises and don't appear to have any sense of smell in spite of rearing up and sniffing the air every now and then. This isn't a big problem for sea creatures, but it seems really strange for snow stalkers.
<u>Solution:</u> Again, not a programmer, I'm not going to tell you how to do your job, but I think the AI could use improvement in this area. In particular, I think it would be really neat if snow stalkers had a developed sense of smell: once the player enters a certain radius (ignore line of sight), snow stalkers begin periodically rolling random numbers to see if they sense the player, and if they do, they will begin cautiously navigating toward the player and attack when line of sight is established. Or you could take inspiration from the original Half-Life's smell mechanics. (video link)

Too Active
<u>Problem:</u> This might seem like a nitpicky thing, but I think snow stalkers move around too much when they're idle. Large predators here on Earth are pretty lethargic when they aren't hunting, and why wouldn't they be? They work hard for their food, they should take every available opportunity to conserve calories.
<u>Solution:</u> A wider range of idle animations. Resting, sleeping, grooming, etc. They don't need to be pacing back and forth to look alive. (another video for inspiration)
<u>Additionally:</u> When snow stalkers are on the hunt, they should look like they're moving with purpose. In addition to getting rid of their confined patrol areas, maybe there could be invisible paths through the canyons that snow stalkers walk along, using their own pathing to avoid obstacles. To avoid cluttering up the already narrow canyons, snow stalkers could retreat to designated rest areas off the path when their AI decides it's time for them to rest.

No Communication
<u>Problem:</u> Snow stalkers growl and howl, but there is no intended recipient and there is never any response. They're supposed to be social creatures.
<u>Solution:</u> Make these behaviors provoke responses from other animals. Maybe snow stalkers growl at each other, prompting them to growl back. Maybe when snow stalkers howl, you occasionally hear distant response howls (doesn't even need to come from a particular source, it can just be a world sound). Howls should also sound more... howly, and less growly. Doesn't even need to sound like a wolf. It's an alien. Tell your sound engineers to get creative. It just needs to sound like it would actually carry.

Glitchy Physics
<u>Problem:</u> I'm sure we've all seen a bone shark hurdled through the water by a weird collision, or a leviathan clip through a wall and disappear forever. Snow stalkers face similar issues, but again, because it's on land, it's that much more obvious. Sometimes they'll be catapulted into the air, slide along the ice, or get stuck in a structure. This last one is particularly easy to replicate (see image). 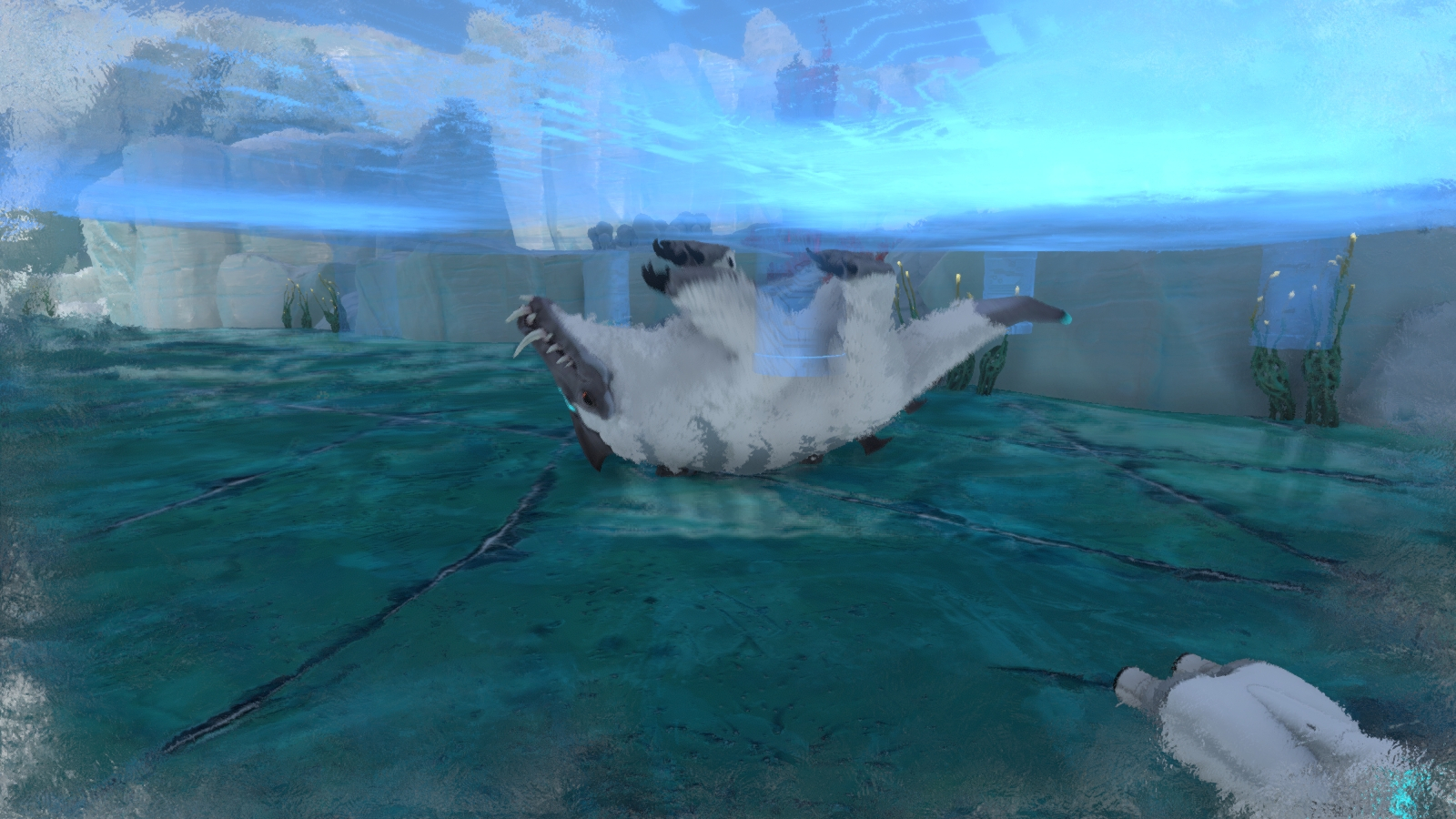 <u>Solution:</u> Make snow stalkers block structure placement (it's good that fish don't, but snow stalkers less numerous and have no excuse). As for the rest of the issues... no idea.