Join Date: 2010-05-07 Member: 71646Members Posts: 258 Advanced user
July 2018 edited July 2018 in Modding
Note: I am not a modder. I originally posted this in the Combat++ thread and Discord. After it received a positive response, I was asked to create a new thread to further discussion. Whether or not anything like this ever finds its way to NS2 is contingent on modders finding it interesting enough to code. This thread exists to help organize that process (if it happens) and to provide a discussion space to refine the idea further.

The worst part of combat has been, generally speaking, the objective: killing the hive or cc isn't particularly thrilling, usually happens in overtime, and is more or less a war of attrition.

There are other issues as well. Teams rarely work together, and the center areas of each map usually devolve into spam by midround. Player dropped pve (e.g. hydras) usually results in distraction at best, frustration at worst. And while combat serves as a great intro to NS2's mechanical input requirements, a significant number of engagements aren't really representative of NS2 classic. There aren't many ambushes involving more than one ambushing player, so emergent alien packplay / teamwork doesn't develop. And because the maps are so simple, we usually see a lot of big clashes involving multiple players (where individual differences in player build are flattened in the chaos) as opposed to a series of distributed engagements around the map (where playstyle and build make all the difference). This limits combat's efficacy as both a training tool and as a game mode with fun rules.

So I'm wondering if something like UT2004's onslaught map control model could be effectively married to the combat player upgrade model. 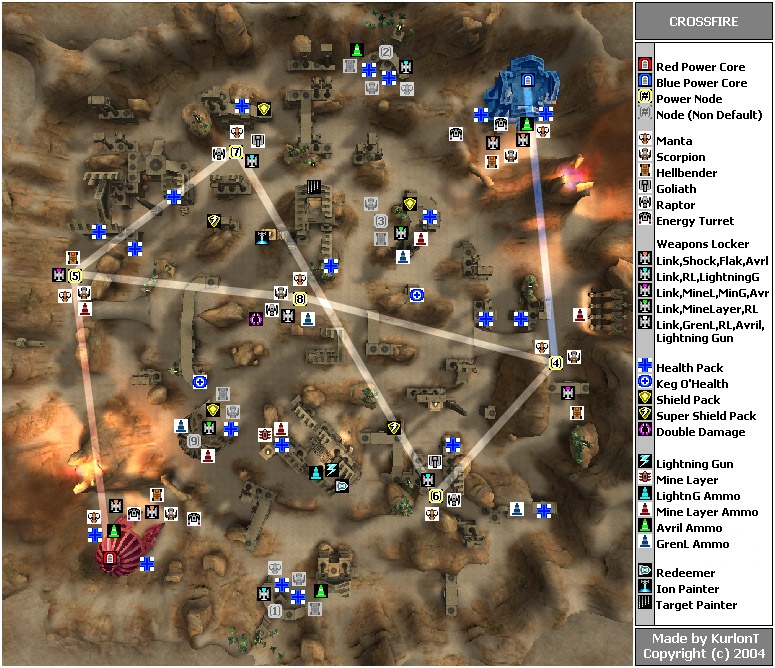 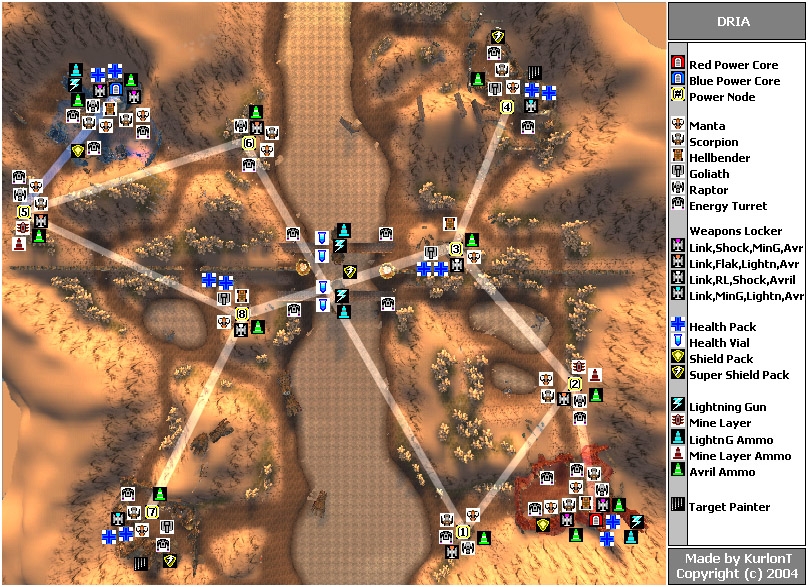 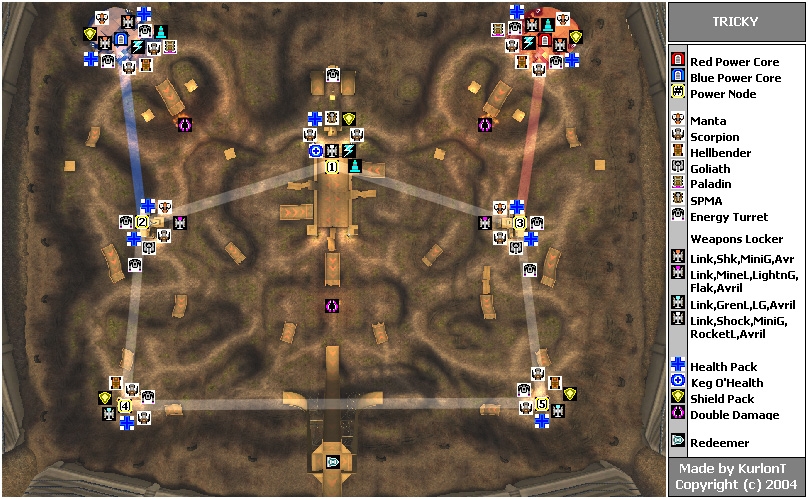 How Onslaught Worked in UT2004:

In the case of UT2004, these maps were wide open areas with vehicular combat. But because NS2 is largely comprised of hallways and rooms, it should be easy enough to envision how the same principle would work. Consider a map like Dria above. Let's say you're starting w/ the blue team (top left) and you want to attack the enemy base (bottom right). You could get there via the following link routes:

And so on for maps of increasing complexity. Simpler maps would require less linking of course. But as far as NS2 is concerned, that just means they'd be more combat-esque. There are other unique quirks as well, and you can read more about the mode here and here and here.

How it Could Work in NS2:

-Have the CC/Hive serve as the "power cores"
-Use specific rooms to serve as the "power nodes". The node could simply be the existing resource node model - although using harvesters/extractors to signal whether a room has been captured might be confusing, since they won't be producing resources.
-Option 1: require welders/gorges to build the node. This encourages upgrade diversity, and because the CC/Hive cannot be healed, it will obviate the need for gorges and marines to camp in base all game.
-Option 2: have a node start being captured once touched by a marine or alien, but allow welders/gorges to capture it more quickly.
-By introducing a control point mechanic, you incentivize a minimum degree of strategic thought. Camping in base results in losing the round because you aren't capturing. Fighting randomly in large, open areas of the map (for example a central courtyard) may result in an insufficiently supported push elsewhere. It's valuable to teach players that there are places they need to be, and that their presence is a priority. That basic capacity / map awareness translates to classic.
-Once a room is captured, you could use the existing lighting and infestation mechanics to signal whether it's alien or marine controlled.
-Option A: You could also allow a minimum degree of pve to spawn (perhaps on a timer) in the room after captured: armories/crags, etc. Thus, the longer a team controls a node, the stronger it becomes. But err on the side of weakness so that capturing nodes is never impossible.
-Option B: An alternate approach would be to allow players to spend their upgrades on specific pve that would spawn for that team in a room whenever it's controlled (perhaps on a timer, again). This would help reduce the number of players who just max out their personal upgrades by serving as an upgrade point sink. It would also teach newer players how the structures function without really ruining combat's flow or requiring a commander (i.e., another learning opportunity that combat currently does not provide).
-Using a link/control model would result in a greater variety of options over the course of a round. Perhaps you mount a significant defense along one path while a smaller subset of your team starts establishing links elsewhere. Perhaps you take the longer route, forcing the marines to address your progress once you start getting close, thereby allowing your team to apply greater pressure to the marine team's advancement elsewhere, and so on.

I think this design solves a lot of combat's fundamental problems. It incentivizes more dynamic engagements, teaches people how to work together to clear a room (which is fundamentally what NS2 engagements are about) and makes the entire mode seem more purposeful without altering the basic idea: you're hopping in, leveling up, and fighting. The maps could be geometrically simple and still work perfectly. This mode would be a far more valuable learning tool for NS2 players than traditional combat is.

Currently, teams can camp in their spawn locations (marines in particular). But per the new mode's design, node rooms used to establish links are both 1) less defensible than the spawn is and yet are 2) crucial to hold. This has important consequences. Right now it's much harder for marines to effectively push the alien hive in combat. But if the marine team has successfully controlled the map via a link path en route to the alien hive, the push becomes considerably easier - and there is no question that it's earned. And this in turn provides the aliens with a concrete objective: push back or perish. The tug of war is far more palpable.

This design adds a strategic layer to the push aspect of combat both with respect to defense and offense while disincentivizing camping. And while welding a CC/healing a hive doesn't teach you much about the game (current combat), the envisioned game mode would encourage support roles to push in order to achieve the objective. The result is that all playstyles get a lot of useful practice that translates to classic. Also, because there are more avenues to push than standard combat, engagements will be more varied and thus more representative of the types of situations you find yourself in when playing classic. I think this would be superior both as a training mechanism and as a mode that people have fun with.