Its the news post I posted on ensl.org where we (NSL) organize competitive events for Natural Selection 2.
If you are interested in playing just skip to the Off-Season or Season 8 part of this post. If you have any questions just post them in here and i'll answer them.

The end of the season is upon us! With finals starting this Sunday (8th) we will be ending the group stages of this season. All matches that aren't played by sunday will be forfeit in no one's or 1 team's favor, depending on the effort shown to schedule the match in the match comments. The forfeiting and final creations will happen on Monday(9th) morning. Several matches still need to played before Sunday so we will be contacting the team captain to get them scheduled.

We have decided as a team to keep the ball rolling and start Season 8 with just a small break between Season 7 and 8. Therefore, Season 8 signups are open and will end on Friday November 27th and Week 1 of Season 8 will start on that Sunday (29th).
By doing this we can make sure you can enjoy playing with less downtime. Because of holidays this means that we will have an official break mid-season but we will supplement that period with a few events. You can still play your matches or participate in some off-season events we will discuss in the next part of this post. Feel free to play the matches scheduled after the break during this time.
Season 8 will be using the same system as Season 7. We will take the seedings from Season 7, move teams around according to how well they did this season, take out teams that aren't signed up for the next season, and add the ones that are. Finally we will split it up into groups of equal size.

For those that are new to the NSL here is how the season works:
1. If you are interested, you create a team and sign up(how can be shown at the bottom of this post)
2. The season will start in the group/round-robin stage, in this stage your team will play against every other team in the division.
3. There is a match scheduled on every Sunday(unless there are holidays) but you are not forced to play on this day, you have a 10 day window to play the match. Just discuss date/time with the opposing team.
4. After all matches are finished, the top 2 teams will go into the finals(or top 4 if we have semifinals).

With the break in the middle of Season 8 we will need off-season events to keep the players active and ready to play the rest of the season. I'll post a schedule of the following weeks at the bottom of the article but anywhere where it says "Break" we can have an event. Please add your ideas in the comments to this article, right now we have:
Skulks with Shotguns Tournament: Daan stopped with NS2 so we (or you) will have to find someone to update SWS.
Nightcup: Teams sign up & I'll plan a small tournament for whoever signed up that lasts 1/2 nights filled with matches.
Draft Tournament: If you are interested in this, we will need captains to pick the teams. With this the captains pick a team out of a pool of players that signed up and you will play a small tournament against each other.
Open Training Night: Want to get better at the game or want to help other players become better? This is the thing for you. Higher skilled players will drill with other players so they can improve and pass their knowledge to others. Want to learn how to position yourself, ambush, improve tactics for when you team up with another lifeform? Come join!

The dates for these are not decided yet and will be planned when we get enough input from people on what they would like to happen. Please fill out this form to find out what you guys want to see.

How to create a team and sign up for a contest:

How to create a team and sign up
If you don't have a team, it's easy to create one with the following steps. If you want to register a pre-existing team, skip to step 4.

Another guide on how to use the website by @tudy : 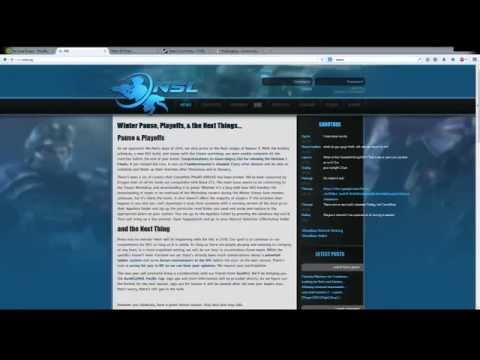