Join Date: 2020-02-13 Member: 257847Members
February 2020 edited February 2020 in Ideas and Suggestions
Do not forget:
These are suggestions for improvement, wishes, dreams and ideas.
I will probably apologize for my poor knowledge of english should there be many mistakes.


I wish to have a reason to visit the ghost leviathans in the void.

First time I played SUBNAUTICA, I tried to reach the bottom to find out more about the "ecological dead zone". That is what the PDA told me to do... I even lost two Cyclops.
But I find out there is NOTHING to see.

How about if we could dive into 11,000 meters deep and face our greatest fears?
Ghostly looking creatures, like from a horror movie should live there. Bioluminescent beings and bizarre creatures of the deep.

Smaller creatures such as: fish, crabs, snails or similar small to medium-sized animals could only exist on the seabed, not in the open areas.
Leviathan-sized creatures should swim randomly. This also helps the players to experience something new and face new challenges with each dive.
Passive creatures can appear either singly or in large groups. But they should also attack if the player provokes them. Example: Player swims very close with the submarine. Player lights up the creature.
It will be very dark down there and the player's view will be very limited, so aggressive leviathan should and must be loners. Players will not be able to predict where the Leviathans are or where they are swimming.

- Players spot it early on the radar and avoid it.
- The player turns the submarine completely off (lights AND engine) and waits until the creature disappears from the radar.
- Player releases a dummy to distract it (remote controlled).
- If the submarine is attacked, only bait food should be used as the last measure.

The water pressure in the deepest point of the deep sea trench is 1170 bar.
That means 1 m³ of water weighs 1070 tons down there.
It would be much more realistic, more difficult, and you would get a little more of the feeling: SURVIVE, if you got water pressure damage per second, depending on how deep you are, or even die instantly.
Of course, that would mean that in the deep sea there is no way to get out of the submarine, catch small animals or scan the creatures down there.
That's why I said that the small animals can only be caught by gravity traps which are later collected by the submarine. The hand-held scanner would also have to be replaced by a remote-controlled scan camera or similar instruments. Leviathan-sized animals should be able to destroy the scan cameras. That would make scanning more difficult. Remember that you can't freeze the animals down there. Building from a certain depth, for example: Building below 5,000 meters should no longer be possible.

The "ATLAS" already looks like a reasonable submarine to be able to dive so deep. 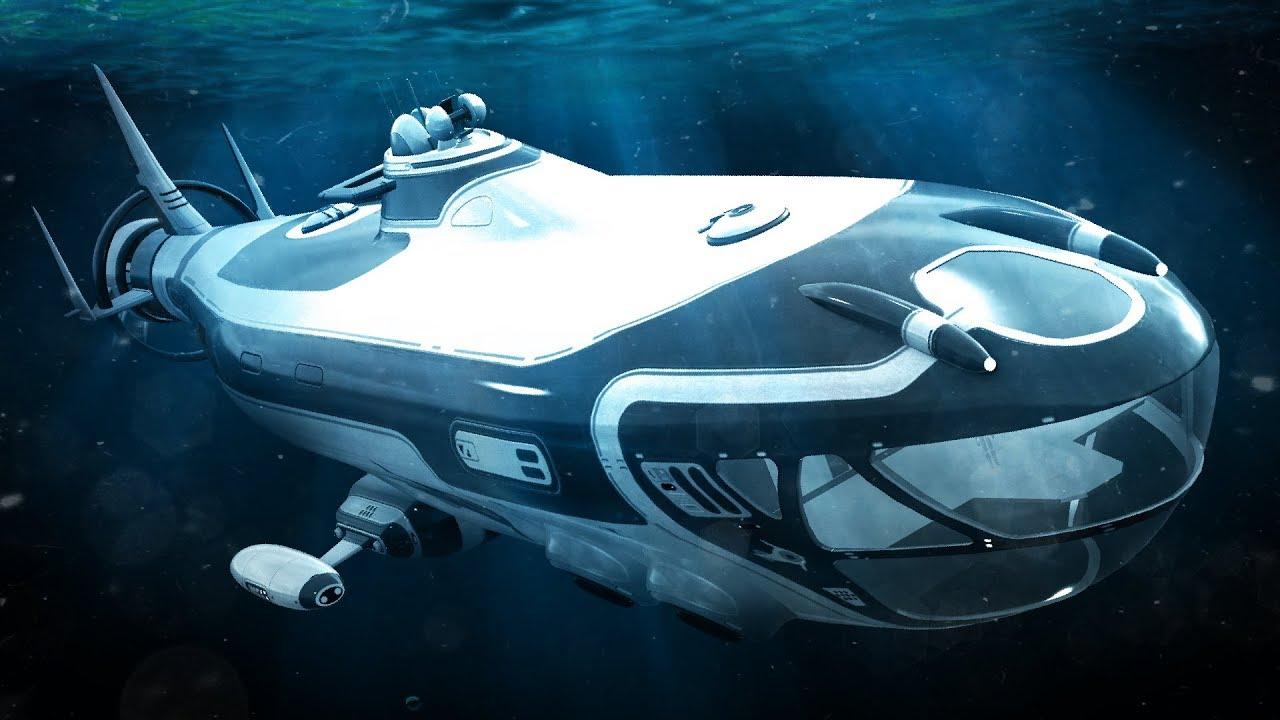 Because the deep sea would be much deeper than the "Lava Zone" (~ 1,700 meters deep), you would need a new, better submarine, which will probably be significantly larger than the Cyclop.
There are already concept arts of what the new submarine could look like.
I know that many players want to be able to drive this submarine one day. There is currently no place to drive this giant vehicle, but that could change if there is a deep sea at some point.
The new submarine could be divided into several rooms. Here is an example: control room, scanner room, freight [ Stackable warehouse (up to 10x in one slot)] and storage rooms, engine room, room with breeding container and maybe decorative rooms such as bedroom (s), toilet or canteen.
The submarine's scanner room can be very similar to today's scanner room. Several cameras can be controlled and they should be able to produce their own light. Large creatures should be able to take the cameras with them or destroy them.
Because the new submarine will be much larger and you cannot simply leave the submarine in the deep sea for repair work (water pressure damage), this work should be replaced by bots.The bots can be remotely controlled like the cameras in the scanner room. They should also be able to produce their own light and be taken away or destroyed by large creatures.

The "Atlas" looks like it has rescue capsules on board. That would also be a very plausible evacuation option because no other vehicle will be able to withstand the water pressure. The rescue capsules, on the other hand, could withstand this pressure and float on the surface. There will be no cave system down there, like "Lost River" but simply an empty space, felt with darkness and the creatures that exist there. This also means that there is always a way up and the escape pods don't get stuck on a cave wall.


Technology and construction costs for the submarine:

The technology for the new submarine should be an alternative to the "Neptune" and should only be available to players who have completed the story and accomplished everything in the game.
As with "Neptune", the construction of the submarine can be divided into different construction phases.
Here is an example of the required building material:

It must be difficult and expensive to dive down there, even the most experienced players should be motivated for hours and have a reason to keep looking and searching.
A very risky adventure in the abyss. Each time, players have to think carefully about how many replacement robots and cameras they will take with them. How much food and water (in my opinion, building in a submarine should no longer be possible) and how much bait food. Everything has to be carefully thought out and every move should decide between life and death (or destruction of the expensive submarine).

Should be a complicated recipe and only used for the new submarine. It is intended to prevent the submarine from being attacked by the creature, since the monsters in the deep sea should be much more aggressive and not just let go like the reaper after a few seconds. Bait food has to be "reloaded" each time, just like Cyclops the dummies.


Reasons to come to the bottom of the sea:

- There is always a reason: to see the first time.
- Find the remaining Aurora escape pods that have sunk or landed outside. Of course, with their last records, stories about mysterious creatures or simply terrifying stories about their last breaths.
- New (sunken) decorative items of the Aurora (That could also be pictures that the survivors shot before they died. Decorative objects of the aliens and artifacts that you can take with you.)
- New technologies and expansion modules for the new submarine.
- Submarine wrecks of the alien race.
- New fossils (maybe very mysterious, where you can't immediately imagine what it should have looked like. (Example: Remains of the
- The joy of discovery

It must be dark at the bottom of the sea, not comparable to "Lost River", the player only has to be able to see what he is lighting.


Landscape of the sea floor:

Unfortunately "Lost River" already represents the deep sea, is unfortunately not as deep as I imagined when I bought subnautica.With transparent, ghostly looking fish and acidic rivers with many remains, it has everything I imagined as a seabed.Of course you can still come up with a lot of ideas, after all we ended up on an alien planet.