Shrek's Grand Swamp Join Date: 2018-07-31 Member: 242594Members
September 2018 in Ideas and Suggestions
I've used my imagination to think of a completely new biome, two flora and three fauna - in some way related to first game counterparts so not that original. These are all for the arctic expansion but I don't expect anything to happen. Or the devs to notice me. Please tell me what you think of these. I've even gone as far as to do a drawing!

This is the name of my biome. It would be similar to a blood kelp or creepvine forest as it is covered in tall plants. They are called hookvines (one of my flora). It is under a thin layer of ice and near a patch of land and ice formations. The polar jungle would end at around 200m before a steep drop off. By the way I thought of this idea before I heard about the arctic kelp biome. It could a replacement or just another biome.

An extremely tall plant only found in polar jungles - like creepvines in creepvine forests. At the top they have a blue flower head and 4 thistles or "hooks". The head rotates towards the sun and when it reaches the ice it's thistles will slowly carve a blowhole to get more sunlight. Most of the plant is a light green stem and near the base the stem splits into 6 thick roots. Fruits called hook plums grow along the stem and they give 5 food, 2 water and take up 4 spaces. Like a creepvine you could get hookvine samples from it which could be made into fuel. Hook plums could be planted in underwater growbeds and the the hookvines could grow to a maximum of 200m.

A tall purple plant with 3 branches. On the end of each branch there is a snaptrap which looks like a Venus flytrap. Inside each snaptrap are 3 pearl fruits which give 10 food, 5 water and take up 1 space. Snaptraps are capable of catching the player and creatures up to a similar size. Prey are lured by the pearl fruits which are bioluminescent and if something stays inside for 2 seconds the snaptrap will close. It will either digest it and open again after half a day or release it after 30-40 seconds. The latter happens to the player and is only dangerous if you are low on oxygen. Inside you are paralysed. You can collect Snaptree samples from it which can be made into fuel like hookvine samples. It cannot be planted.

A species of ray only found around polar jungles that cannot properly swim. Instead it can spread out its wings and glide. It can breathe in both water and air. There is a large claw on the end of each wing that it can use for climbing and clinging onto ice and plants. It is able to glide above water as well but only downwards. They will eat any kind of fruit they find and most know how to get food from snaptrees. When a predator or player gets near one it will move away. If you hold out a fruit for one it will take it and be tamed until you hurt it. It is related to the skyray. Tamed glider rays will ignore the player and sometimes come up to you. They are diurnal and during night they will cling onto the inside of a chosen hookvine base and sleep. Their eggs can be found in hookvine bases and will be visited by a parent many times a day and at night.

A territorial fish related to the mesmer that is a bit larger and has larger fins. The name is meant to be a mix of replicate and Mesmer. There are different variations that are all patterned to look like more dangerous fauna like squidsharks or reapers. If that does not work, they can cause hallucinations of the chosen animal when close which also makes the screen darker. When most creatures see it show it's fins they will act how they would towards the real thing. All things are fooled by the hallucinations. Their bite does 35% hp and they eat small creatures. They sneak up on players before trying to make hallucinations, resulting in a kind of jump scare. Most live solitary but some live in groups of 2-4 which will herd prey when hunting, take on bigger things and will purposefully hunt the player.

Basically a bigger, better ampeel. It's colour is similar to the early concept art. It is rare in the polar jungle and gets more common in deeper parts. It is very territorial. Usually it will roam around aimlessly but for certain reasons it will change the power of its electricity and act differently. It can go into stealth form - meaning it has no bioluminescence or electric current around it. The volteel uses this when it sees a vehicle, enemy or prey. It can also go into supercharged form where it emits much more electricity. It does this when near vehicles or other threats so it can emit a discharge attack. This attack is similar to a crabsquid's. It does 30% hp and stuns your sub/ prawn etc for a few seconds. It can also bite the player which does 60% hp so it is not something to mess with.

Here's one of my mediocre drawings. I only understand the basics of computing so I've done it by hand. Might do the others if I can be bothered. 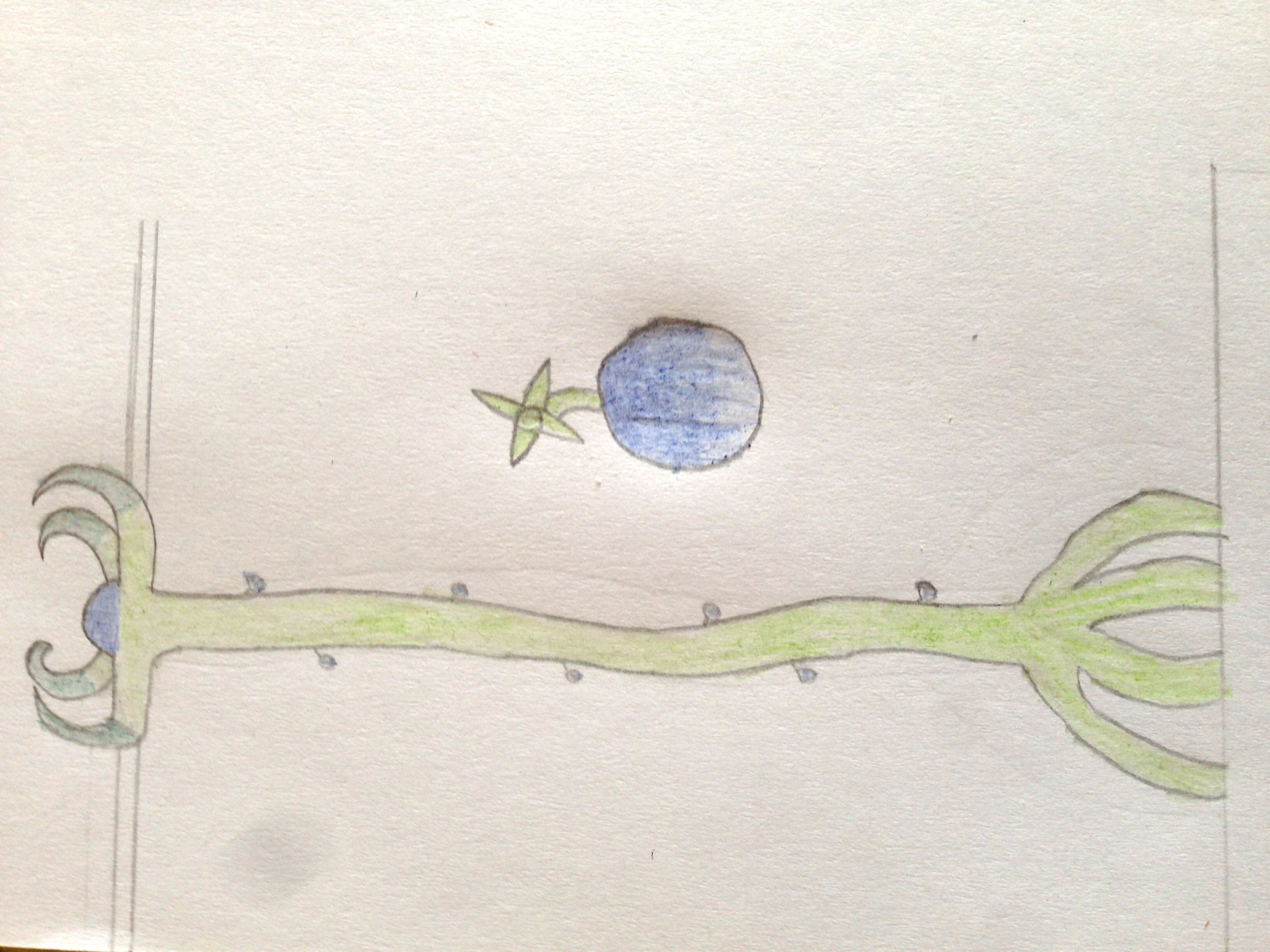 Hookvine and hookplum. It is through a thin layer of ice. I don't think any fruits are to scale including ones on the plant itself.
  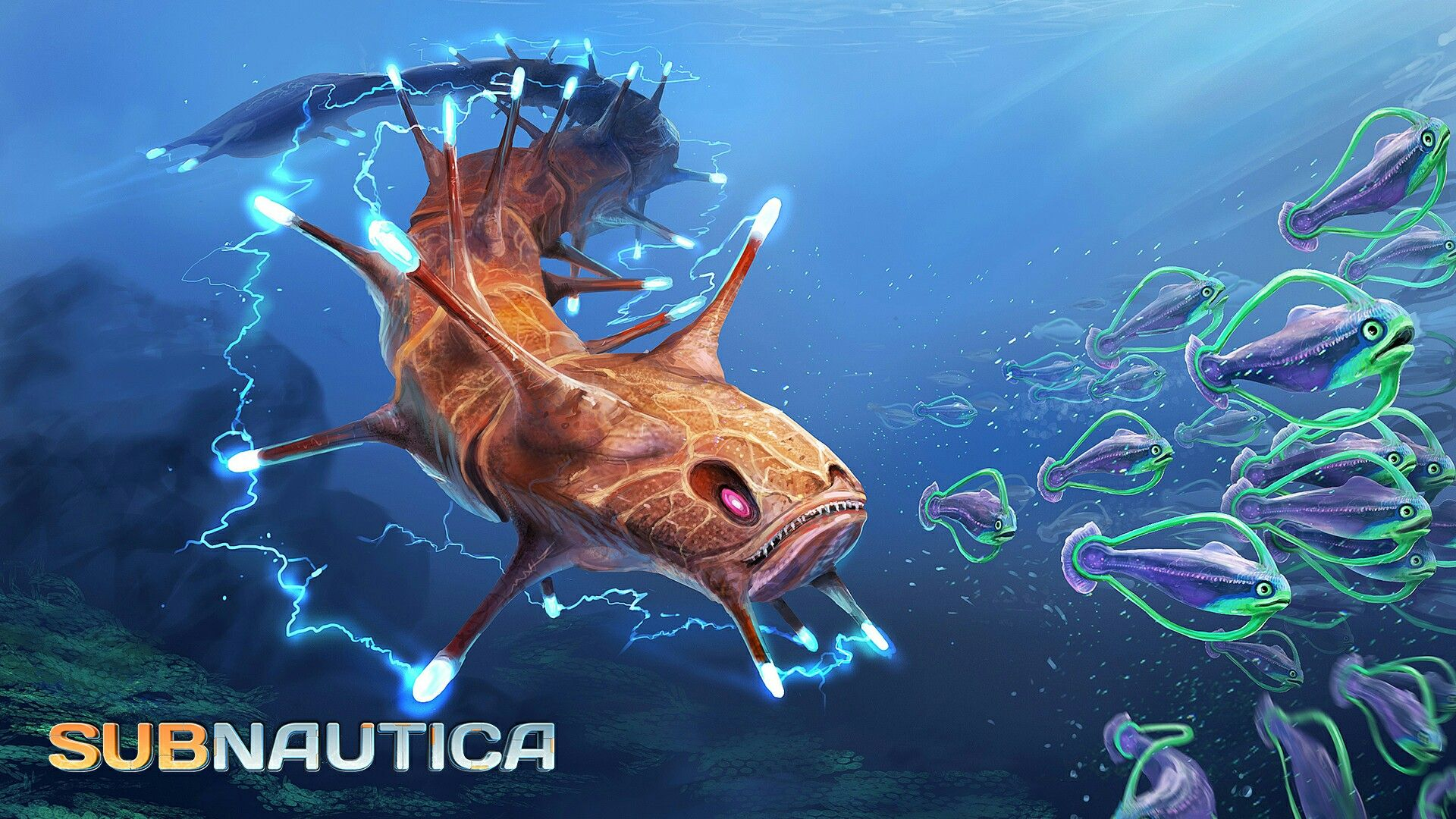 The volteel would look like the ampeel early concept art, maybe a bit more red/maroon.