Join Date: 2015-12-08 Member: 209825Members
April 2016 in Translation
I have adjusted Agency FB ttf font to include Czech glyphs missing from the Latin Extended A section. This is how it looked before: 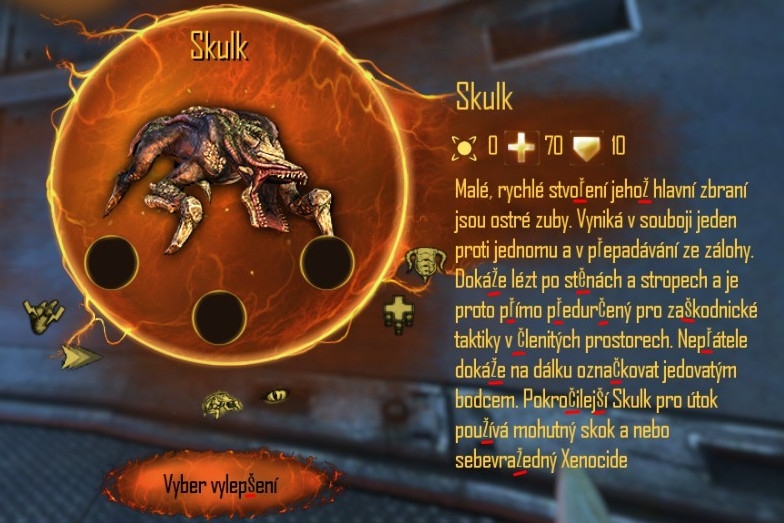 And this is how it looks now Now we can finally read Czech strings well. Developers, can you please include the adjusted font in a new version of the game? (I really hope this gets included, I spent two days laboring with the font system, and half a day drawing the glyphs.)

The new font is available as an attachment.

I took the existing AgencyFBcyrillic.ttf file, from which all the AgencyFB_* files get generated, and added the new glyhps to the file, then named and saved it as Agency FB Extended. If you prefer a different way of creating this, just tell me.

When generating the fonts, you need to edit all the AgencyFB_*.bmfc files to include the new glyphs (I simply included whole Latin Extended A section), and probably also increase the rendered picture dimensions, because NS2 doesn't work with multi-page bmfc fonts (that was really sneaky, and should be documented, because I wasted 2 hours on debugging that).

Here are example rendered fnt fonts with the new glyphs. You can drop it into Steam/SteamApps/common/Natural Selection 2/core/fonts to immediately get Czech language support. You will probably want to re-render that yourself, though. Also, Antonio is not included in those fnt files, because I have no idea how you merge those two fonts into a single one and it's not documented. If you do that, please don't forget to exclude from it the glyphs which are now available directly in Agency FB. (Btw, you should stop doing that, it really looks like crap and is very painful to read. It's usable as a very basic fallback, but not if you mean internationalizing your game seriously).

There is still one problem with Czech characters, and that is the Stamps font, only used by Aliens and just in a very few places. The non-ascii characters are completely missing:

This is saying Hive death imminent in Czech with 4 characters completely missing. It should have been "HIVE JE TÉMĚŘ ZNIČEN".

There is no source for Stamps font, so I can't draw the missing characters. But since the Stamps font seems extremely limited, could you please consider stop using that completely? Either use Agency FB for aliens headlines as well (you use it everywhere else anyway), or pick a better font with much better international support (at least full extended Latin)? You'll need to replace this ascii-only fonts anyway, or at least make a decision table to use different fonts for particular languages, because otherwise you can't have Chinese/Japanese/Korean/Arabic etc support (currently those languages are completely broken, nothing shows up).