Will the "corrupted" databank entry ever be adjusted or addressed?

North Carolina Join Date: 2016-08-15 Member: 221304Members
August 2017 edited August 2017 in Subnautica General Discussion
When playing through the world in Subnautica, you come across lost PDAs from other crew members, Alien Terminals from key points of interest, and Data Terminals from certain parts of the Aurora. In particular, there is a database entry from a Wreck near Lifepod 17. This one is of particular interest (and annoyance) as it doesn't have any practical technical data, universe lore or anything of interest from before. I'm of course talking about the terminal from the lower level of the wreck, the one with the lit display in the otherwise powerless section of the ship: 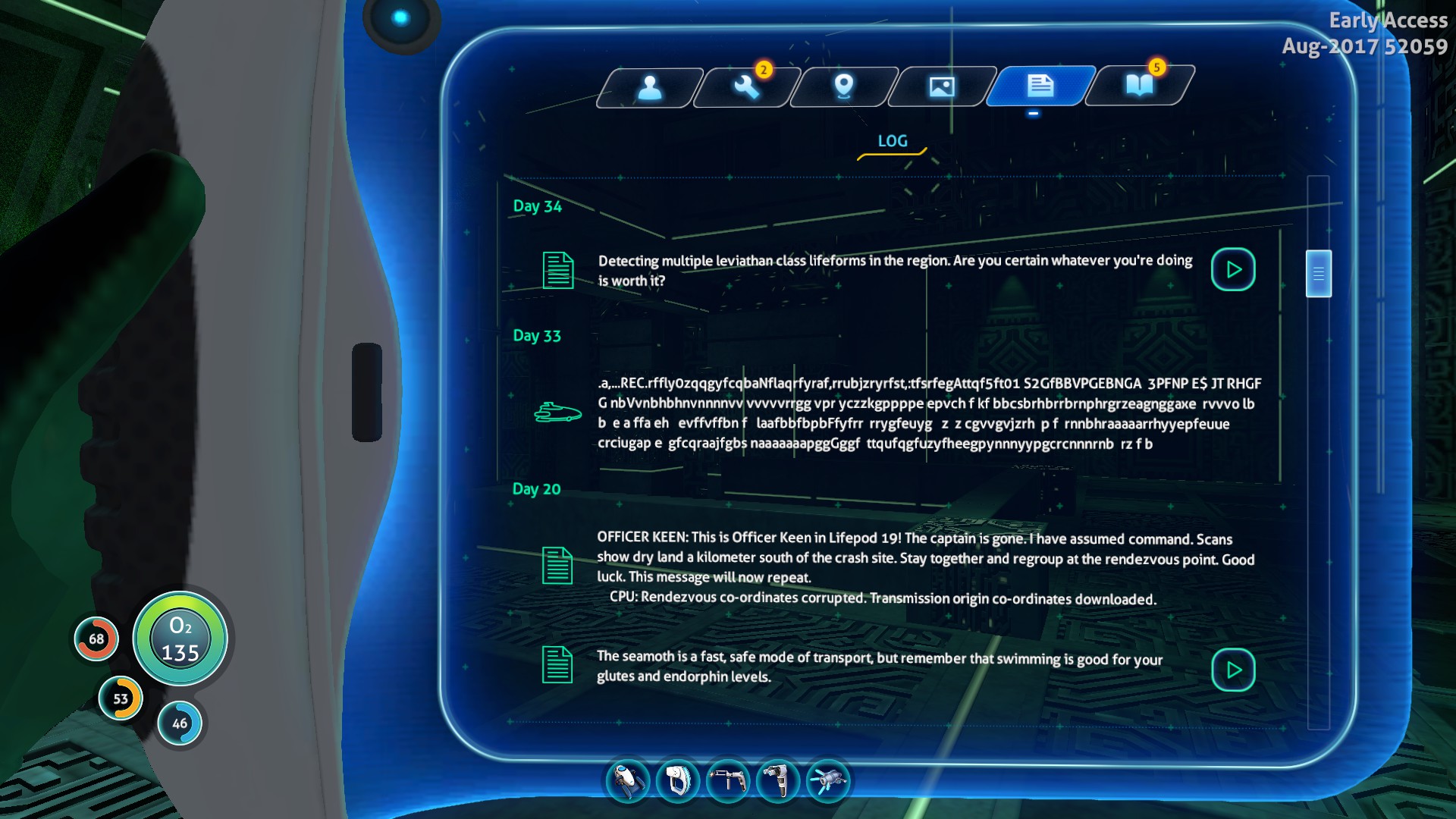 This particular file has probably been this way long before now, but I've found very little information online regarding why it's there. It's time to solve the mystery of this perplexing dilemma!

Is the data corrupted or damaged due to the crash? Not likely, as other Data Terminals found on the Aurora are fully functional and their information is intact - in fact the Data Terminal in the Medical Bay detects corrupted files on your PDA and corrects them (aka adds another Blueprint) but this entry stays unchanged. Could it be then that it only affects Terminals from Wrecks seperated from the Aurora? That's an unlikely possibilty, as at least one Terminal from a Wreck on the Underwater Islands has all of its data intact as well.

Could it be some form of a cipher to protect sensitive data? Perhaps someone on the Aurora was trying to smuggle intel to another person or party (perhaps another Corporation?) and didn't want to risk getting caught... After all, Alterra has eyes everywhere and have been known to record people's conversations without their knowledge... or consent. But I've tried various cipher and decryption tools online, and really it just seems to be a jumble of letters in random patterns.

Could it then be an attempt to delete or destroy data by someone like the Warpers? I highly doubt that, since the Warpers mainly seem interested in destroying biological entities affected by Carar, and their scythe appendages seem unlikely able to access a human data-entry terminal.

Not to mention the fact that Wreck never features a Warper, and every other Wreck with Warpers has intact Terminals/PDAs, they don't seem to be the culprits.

So then it boils down to this question: Why is it that ONE Data Terminal out of dozens of binary storage is the only one with a scrambled info entry? Is there some future story development for this, or is it a red herring from the developers? Could we get some input regarding why this is, or otherwise could the data entry be replaced with something more coherent? I like the idea of having "corrupted" data we gather that has to be defragmented up by the PDA to get proper entries, but this singular distraction is just too off-key. Can @Foxy or anyone check into this before 1.0 launches please?

P.S. (There is a subtle Star Trek: TNG reference embedded... can you find it?)