U.S. Join Date: 2016-01-19 Member: 211679Members Posts: 847 Advanced user
December 2016 in Subnautica General Discussion
It is a period of civil war. Rebel (communist) spaceships (subs and forces), striking from a hidden base (in the lost river) have won their first victory against the galactic empire. Alright, that's enough of that star wars reference!

However, it is a period of civil war. The powers that govern the Subnautican planet have devolved into inevitable hostilities. On one side, the Communists, led by the Greater Communist Shoal Conglomerate. Their forces include the Warpers of the Public Health/Safety party, and (questionably) some members of the Safe Shallows. They fight for communism, and to retake territory they thought was at risk. On the other: The Conglomerate, an alliance of some of the most unlikely allies in the ocean. The Conglomerate consists of the Neo-Luddite party, commprised mainly of crabsquids, and the Republic of Koosh as well as the National Violence Party. The Rebublic of Koosh has traditionally feuded with the NVP, howver they have banded together in an effort against the Communists. This is the scene set for war.

-The Rules- (yes, there are rules, this is a civilized society and we shall have codes of conduct for warfare)
1: NO use of precursor weaponry or devices, other than their intended purposes. For the Array, it cannot be aimed at any biomes, considering its intended purpose was to keep ships out. Portals may be used, but not detonated. Additionally, ion crystals in precursor caches may not be detonated. The reasoning for this is merely that they would end the war in seconds, similarly to mutually assured destruction. Nothing would remain.

2: Now watch and learn, here's the deal: He'll slip and slide on this banana peel!
Have you ever played risk? Because that's how it's going to go down. (If you haven't played risk, see the spoiler at the bottom of this page) On this here map beneath, there are the biomes and borders laid out. Each biome will function as a territory, holding a certain number of "armies" (marked by the icons of each species). As per Risk rules, I will be doing any and all dice rolling (Seeing as I'm functioning as a neutral entity) for each attack. As for turns, each party will get a turn to move/attack. Turns will go in this order: N-LAP, NVP, the Republic of Koosh. Followed by the GCSC, and then PH/SP. In terms of how one gets armies at the start of a turn, it will be 1 army per biome controlled. "biome controlled" just means that one member of your species is in it- biomes that are controlled by members of your alliance without your species in it don't count.

3: Species advantages:
Seeing as each species has distinct traits, I've decided that each one receives a slight advantage during combat.
NVP: Gets to add 3 to any attacking dice role value (because VIOLENCE!) (oh, and reapers count as 3 armies)
GCSC: Gets to add 1/2 the number of armies they have to any attacking dice role value (because strength in numbers, comrades!) <--<i>example: Attacks with 4 armies, gets to add 2 to attacking role value
PH/SP: Get to attack or move 1 biome over from any adjacent biomes (they can teleport through 1 biome when attacking or moving)
N-LAP and R of K: Get to negate 1 unit/army (of choice) from any attacking/defending force (Mesmers have hypnosis, Crabsquids have EMP)
If The Greater Ambush Association takes part: GAA forces get +3 added to their attacking roll when attacking 2 or fewer armies (because ambush!)
UCR = have a 1/10 chance to "happen to have reinforcements" consisting of a snekzilla. If this happens, then they automatically win the engagement.

The War Map
-species/party key-
Biter/Blighter = GCSC
Crabsquid = N-LAP
Reaper/Stalker = NVP (stalker = 1, reaper = 3)
Warper = PH/SP
Crabsnake = UCR
Mesmer = R of K
GAA (if they decide to fight) = sandshark
EPCA (only because it was televised that one of their number had been militarized by the GCSC) = reefback (3 armies) 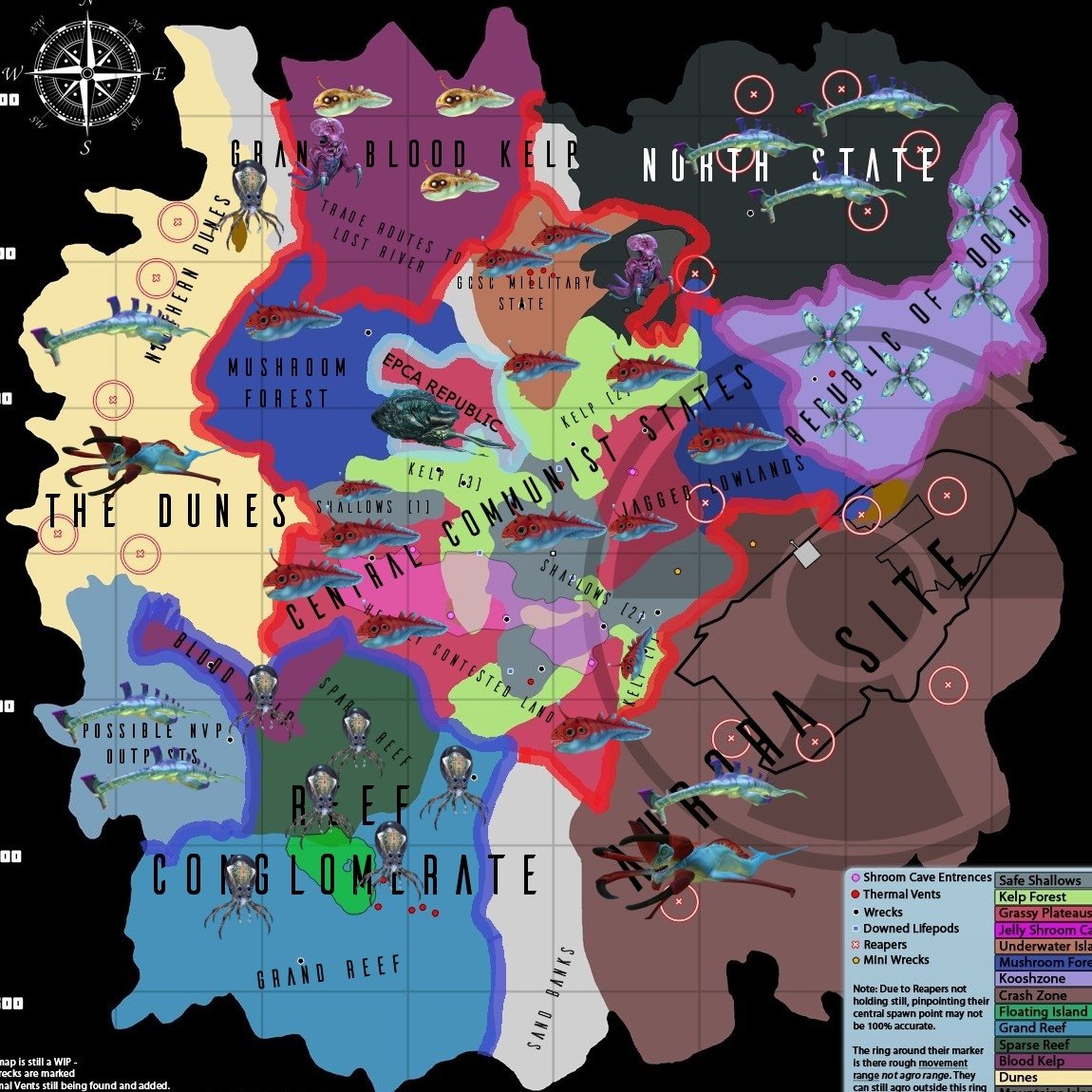 In regular risk, the goal is to take over as many territories as you can. This is the same goal for Subnautican war.
To do that, you have to own territories. You own territories by keeping armies on them. For Subnautican war, the territories are biomes, and the species icons are armies.
Each side has armies. At the beginning of each turn, you get armies based on how many territories you control (for here, one army per biome). You can attack territories that are adjacent to territories you have armies on during your turn
When someone attacks during their turn, they attempt to move their armies onto the occupied territory. The attackers decide how many armies they want to use to invade a territory, to a maximum of 3 armies, and the defenders can defend with a maximum of two armies. the two sides roll dice equal to the number of armies (so in this case 3 for attacking, 2 for defending). Then (it's convoluted) you order the dice from highest to lowest value and match them up- in each pair, whoever has a lower dice value will discard an army. Since this is kind of (a lot) convoluted, here's a picture: 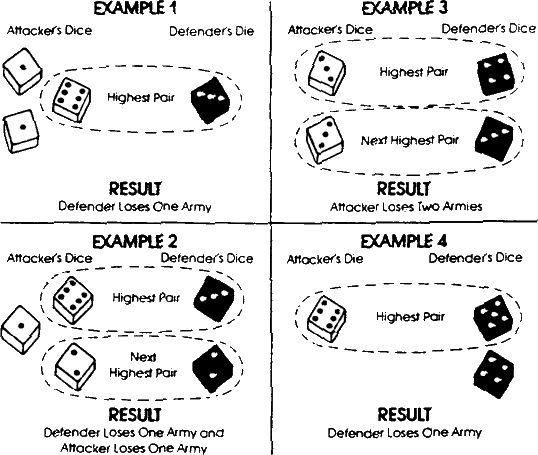 You can continue attacking until all but one of your armies is defeated- because in order to occupy a territory, you have to have at least 1 army on it. For the defenders, you can defend down to the last man- and if everyone dies then the attackers move in and occupy the territory.

So, just to be clear, the turns go like this:
1: Get new armies based on the number of biomes you control. Distribute them however you want between your territories (By the way, for each alliance you can move your armies through their biomes, but may not attack with their armies- with the exception of there being no one there to take the turn of a party *cough* *PH/SP* *cough* @Enderguy059 )
2: Attack with armies (can opt out of this)/take territories
3: Move armies

And no, we will not be playing with Risk cards or any of that other nonsense.
Paleo/Bio nerd. Big fan of Subnautica, particularly the creature design.
riskdiceexample.gif 12.2K
dicerules.png 60.2K
WarMap1.jpg 325.3K